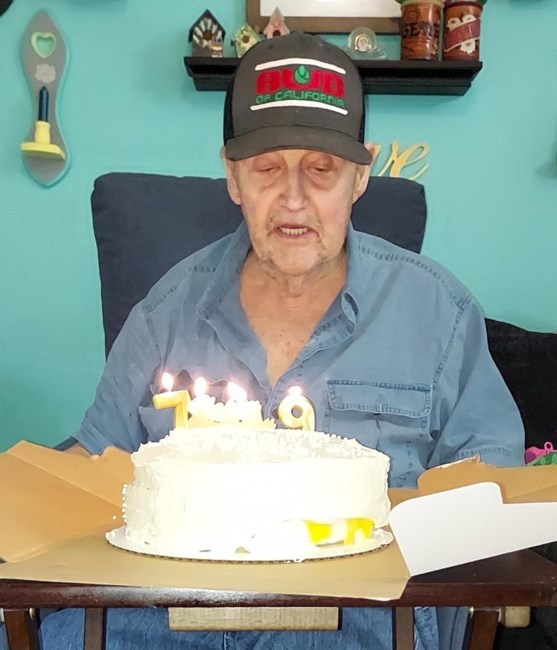 Gene Simpson was born August 30th, 1942 in Finley, CA to Homer "Jack" Irving Simpson and Betty Pauline Simpson (née Sperling). He and his brothers Jimmy Paul and Bobby Dale, and his Uncle Jerry Simpson (Jack's youngest brother) whom came to live with them when his parents passed away grew up all throughout California, Oregon, Washington, Arizona, and more traveling with the harvesting seasons as his parents were fruit tramps by profession. He served in the United States Army for 2 years and did two tours in Korea during that time. Following his discharge from the army, he was working in Shafter, CA when he met his future wife, Doris Jean Kilgore, although when they first met, she told him her name was Randi when they first met, he won her heart, The two married on October 23rd, 1964 and in the process Gene also became a dad to her two sons Jeffery Guy (4) and eight month old Jerry. The following year they had their daughter Gena Renee on March 11th, 1965. Together they lived in Bakersfield, CA, then moved to Salinas, CA in the early '70s. That's where they formed a great friendship with their neighbors Mel and Geri Kalstrom. Gene and Doris really held the Kalstrom's in high regard and made a point to always remain in touch throughout the years until both of them passed on. They moved back to Bakersfield after a few years in Salinas, and a few years later, they moved to Blythe, CA where they remained until their kids were grown. They moved to Prunedale, CA in the late '80s and Gene got a job at Weyerhouser in Salinas, CA as a forklift operator, they then set more permanent roots when they bought their condo on West Rossi Street in Salinas in 1990. It was here they made wonderful memories and had a lot of laughs. Friends and family knew they could always stop by for a visit anytime and the door was always unlocked. They lived there until 2018 when they moved to La Canada Mobile Estates for more accessible living with their declining mobility. They welcomed their first and only granddaughter on December 21st, 1994, Kenedee Renee Menefee. Kenedee and Gene were best friends since day one and he always found a way to keep her entertained. They would ride the bus all over town just for fun, go to the mall every Sunday, Gene's favorite store was Spencer's Gifts, he bought a wagon and toted Kenedee all over town in it visiting friends and loved ones. He was truly the best Grandpa ever. Gene retired from Weyerhaeuser in 2002 where he made many lasting friends and many funny memories. Gene loved hunting and fishing, and was an avid knife collector. He liked to make knives, and canes for friends and family. When he made a knife for someone or gave them one they liked he had a rule.. they had to pay him.. but he would only accept a penny or a dime, it was supposed to be just for good luck. Gene was preceded in death by his parents Jack and Betty, his older brother Jimmy, his uncle Jerry Simpson, His son Jeffery Guy Simpson and numerous, friends and family members whom Gene cherished. He is survived by his wife Doris Jean Simpson, son Jerry Simpson, daughter Gena Renee Simpson, granddaughter Kenedee Renee Menefee all of Salinas, CA, his brother Dale Simpson of Yuma, AZ, and numerous nieces, nephews, cousins, and friends. We will forever cherish the time that we had with him. He was our main character. Even though no time ever seems like enough, we do take solace in the legacy he has left behind. We can always find a way to laugh with all the memories he's given us, we can always solve a problem with the knowledge and experience he's showed us, it seems that in a way, when we need him, he will be there.
See more See Less

In Memory Of Gene Simpson