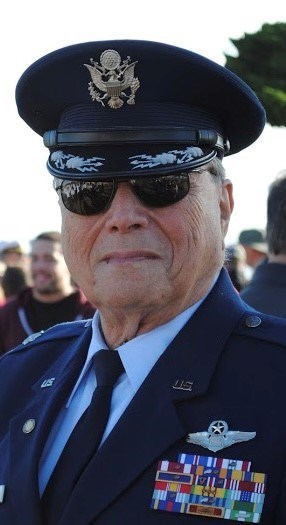 Obituary of Lt Col Eugene Andrew Alfaro Lt Col Eugene Andrew Alfaro, USAF (Ret), a Vietnam veteran and longtime resident of Chula Vista, CA, passed away on December 24, 2021 surrounded by family. Gene, as he was known to many in the area, was born March 4, 1935 to Eugene Domingo Alfaro and Anna Mederak Alfaro. He attended New Brunswick High School in New Jersey and started classes at Rutgers University before enlisting in the U. S. Air Force in 1956. He entered Officer Candidate School in October 1961, and went on to James Connally AFB, TX for Navigator Training, graduating in February 1963. Lt Col Alfaro had numerous assignments which included Navigator Instructor, Forward Air Controller in Southeast Asia where he was awarded the Distinguished Flying Cross, Staff Officer at Langley AFB, VA where he headed a group studying and implementing Remotely Piloted Vehicles, then to HQs EUCOM in Germany as a Political/Military Affairs Officer, back to Langley AFB as a Plans Officer and finally retired in September 1987 from Atlantic Command to finish his 31 years in the service of his country. After retiring, Gene moved to Chula Vista, CA. He served on committees, the Board of Directors for the Homeowners Association and as a Neighborhood Representative for 15 years. He served as the Aerospace Education Officer to the Civil Air Patrol Squadron 201 cadets. He served as vice president of the Brig Gen Robert Cardenas San Diego Chapter of the Air Force Association. He served as president of the Distinguished Flying Cross Society in San Diego. Gene was preceded in death by his parents. He’s survived by his wife, Patricia C. Alfaro, daughter Lora B Fly, sons Eugene M. Alfaro and George V. Alfaro, step-son Col (Ret) John E Metz, and his sister, Marianna Alfaro, as well as 7 grandchildren and 6 great grandchildren. His family has organized a memorial service to honor Gene’s life and military service which will be held at the Miramar National Cemetery on January 20, 2022 at 10:30 am. In lieu of sending flowers please make a contribution in Gene’s name to a favorite charity.
See more See Less

In Memory Of Eugene A Alfaro