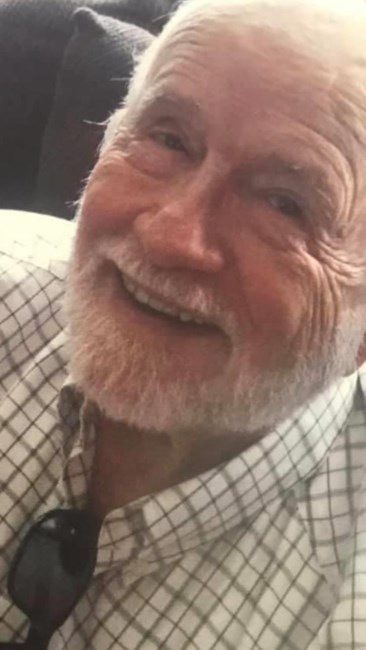 Edward Lyle Huston, 92 of Oceanside, CA passed peacefully in his home, Sunday evening, the 7th of August. He was always a fighter and a positive person--- and that bore out to the end. There was no fear in his eyes, rather big smiles of recognition. Love showed where his heart was to the end. Ed was preceded in death by his siblings: William, Genelle & Richard; as well as his parents William Edward and Faye Bland Huston. He is survived by his children Scott (Linda) Huston, Kelly (Jackie) Huston, Joel (Pam) Huston, Michelle (Steve) Forman and Paul Crabtree, widower of Ed’s eldest daughter, Genelle who preceded Ed. He was also preceded by Edna Murray, the mother of his children. He is further survived by Betty Huston, Ed’s second wife; and Betty’s (and William Murray’s) children; Ed’s stepchildren Linda Huston, Debbie Seawell (Kevin), David Murray (Caren) and Jeff Murray (Wendy, who also preceded Ed). Ed is preceded by granddaughter, Rebecca Joy Huston and by great grandson, Kellen Scott Sanchez; and is survived by 17 grandchildren, 23 great grandchildren, one great-great granddaughter… and still counting! To say that Ed loved his family is a gross understatement. He engaged with all of his children & their spouses, stepchildren & their spouses, grandchildren & their spouses and ALL of his great grandchildren. He made it his passion to know how each and every one of his offspring were doing! He maintained a record of his family tree until he was nearly 90 years old. Other passions in his life were hunting, fishing, boating (building and using), traveling and sailing. To the amazement of most who know him was his ability to stay on top of the current events of each person he knew. Ed had a gift for making all whom he encountered to feel special. Amidst the plethora of friends and extended family, Ed had a remarkable 65-year career as a successful engineer, corporate executive and business owner. The foundation for this Depression era baby (born in 1930) was education. He was inspired by his schoolteacher mother and carpenter father who made ends meet by operating a boarding house for students at the University of Illinois, Urbana-Champaign. Ed achieved his bachelor’s degree at U of I; and graduate degrees from USC & UCLA while working full-time and raising his young family with Edna after their move from Illinois to Southern California! Even though his time was limited, they joined a Lutheran church in Redondo Beach and Ed made the time to lead bible study meetings in their home. Of all who knew him, there is one word that never escapes the qualities expressed to describe Ed. That word is generosity. Huston homes from Champaign, IL to the California cities of Torrance, Manhattan Beach, Fallbrook and Oceanside ALL became Way Stations for friends and family who needed a place to stay… short or long-term! The friends he helped were welcomed in like family; and the family members were taken in like … family! Ed’s final act of generosity was the “adoption” of his caregiver’s family into his family. Dione Reiger was Ed’s employee; but by all accounts, he saw her as “Family.” In closing, to have loved so many and been loved by so many confirms that he had a very successful life. To that end, his personal signature on letters and cards was his mantra “Love Always, Ed” or “Love Always, Dad” or “Love Always, G’pa”… And he really did!
See more See Less

In Memory Of Edward Lyle Huston